Computer security has established itself as a major and hugely active field of computer science. Its engine is driven largely by perpetual arm races between attacks and defenses, between breaking stuff and patching stuff. Helped by disproportionate media interest and sometimes biased narratives, security comes off as a fear factor, as something to be pessimistic about. It is true that the defense guys do not always take the spotlights, that only secure systems are ones that do nothing and thus being useless. Nevertheless, computer security is an art, and portraying their principals at work can be great movie material. Scorpion and Mr Robot, two popular Hollywood series with their the main heroes being computer hackers, are raising public awareness and appreciation for security professionals.

This post traces the evolution of memory vulnerabilities, one of the most important themes in computer security. In fact, gun on my head, I would say it is the very essence of the field. Although if the same gun was on my head only a month ago, the answer would have been different. Until last month, I was familiar with general ideas about memory vulnerabilities, and could feign interest and awe when hearing about new vulnerabilities and exploits. Having attended few research seminars on the subject, mostly on the defensive side, I had an impression that dealing with vulnerabilities are mundane, ad-hoc process highly dependent of the architectural specifics. In retrospect, though, those seminars were mainly from programming language community and thus were small, biased samples. I had been seeing trees and didn’t fully appreciate the forest.

Memory vulnerabilities are gateways to gain control over somebody else’s machines. As much as exposing holes in software implementations, they embody creativity and humans’ desire to tinker. But more importantly, they drive progress in many aspects of computer science: from hardware, operating system, compiler, software design, to operations and management. As far as a attack-defense arm race is concerned, defense sides appear to be at disadvantage, having to face challenging (undecidable) problems of software verification, predicting and accounting for human behavior (One thing I learned from a short time working in the industry is that enterprises have come to accept security exploits as inevitable and instead are treating them as risks and spending more resources in managing them). Seen from a research perspective, however, memory vulnerabilities and related defense mechanisms are extremely educational tools. In the process of understanding them, I learned great deals about hardware architecture, compilers, runtime, operating systems and other cool software techniques. I learned to appreciate the security processes previously perceived as cumbersome if not redundant. And I started to marvel at how incumbent operating systems and critical software systems manage to keep themselves as secure as they are given their complexity.

Attacks based on memory vulnerabilities have two critical ingredients: the vulnerabilities themselves, and the exploits. Finding vulnerabilities is essential looking for places where memory can be corrupted, which could be as simple as going through the source code. Crafting and launching the corresponding exploits often require more craftsmanship. Defenders use this division to steer their strategies, either to nip attacks at their buds by ensuring memory safety, or by making exploits more difficult if not impossible.

Running processes use stack for function calls. In Figure 1, calling f(x,y) comprises a number of steps: 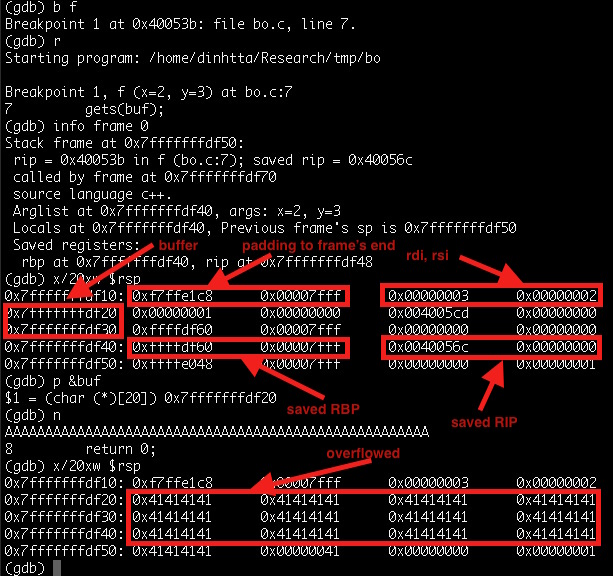 Nearly every work on stack overflows cite a classic paper in the late 90s describing the very first exploit [1]. The basic technique is to write to local function variables beyond their limit thus to overwrite saved return IP (retaddr). When the function returns, control is passed to a different address than originally intended, thus the name control hijacking. In Figure 1, this is done by copying at least SIZE+8 bytes (on 32-bit machines) on to array, where [[SIZE+4]..[SIZE+8]) byte is a new address under the attacker’s control.

In our example (Figure 2), buf is pushed on the stack at address 0x7fffffffdf20 (there are also 12 bytes of padding at the end). After copying 53 A characters, both the save rbp and rip are overflowed with A. Running this inevitably leads to Segmentation fault.

Exploiting this corruption, back in late 90s, is done by writing attacking (or exploit) payloads — often spawns a shell — to the stack itself and pointing the new return address there. To accomplish this, attackers have to solve two subtle challenges:

One prerequisite of the above’s exploit is that codes can be executed on the stack: the corrupted return address points to an address at which the CPU would happily execute instructions. Realizing this requirement, the hardware community was quick to propose a countermeasure.

Countermeasure 1: memory can be either writable or executable, but not both. Referred to as NX, it essentially is a bit checked by CPUs before executing or writing to a memory address. When set properly by compilers, this bit eliminates a significant channel for exploit delivery: it forbids attackers from running their own codes on the corrupted servers.

Another observation of the above’s exploit is that corruption to values on the stacks go unnoticed: CPUs would treat AAAA as any other valid return address. Programming language community was quick to come up with a solution. 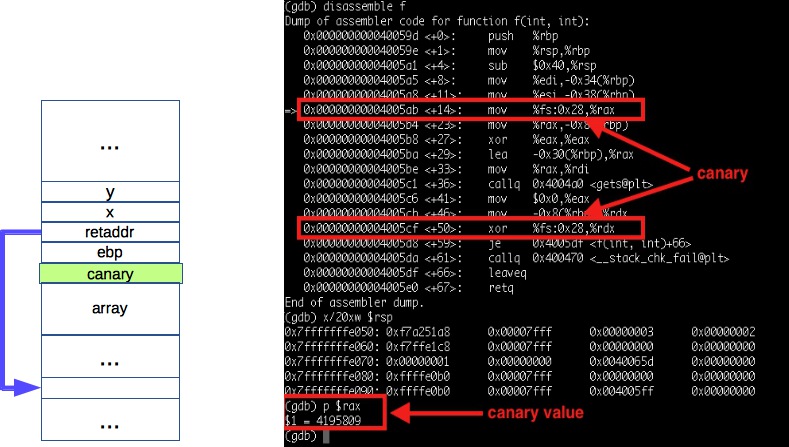 Countermeasure 2: protect return address integrity by canaries. In function prologue (containing instructions executed after call), compilers would push canaries (random, secret values) on the stack right after pushing the return address. In function epilogue (instructions executed before ret), compilers would check if canaries are correct. Figure 3 illustrates a poor-man solution to return address integrity. Stack canaries are enabled by default on g++ (at least for 4.8.4 version). When running f, its stack content looks the same as without canaries. However, the code section of f now contains additional instructions:

Countermeasure 1 and 2 are examples of exploit prevention, but they are essentially dealing with symptoms. To remove the causes, it is clear that memory safety mechanism is in need to eliminate any chance of memory corruption.

Countermeasure 3: bound checking to ensure memory safety. One reason why C/C++ are fast is because of its lack of memory safety, thus allowing one to write beyond objects boundary. Java, for instance, prohibits such behaviors. Basic ideas behind memory safety are to perform bound checking before writing to objects (which C/C++ relies on developers to do). Baggy bounds [2] is one proposal which enhance C/C++ memory safety by storing and consulting bound information in a separate table.

Next parts will focus on:

[1] Smashing the stack for fun and profit. http://insecure.org/stf/smashstack.html