Almost a year has gone by since I sat down and decided to take on Byzantine fault tolerance protocols, starting with its poster child PBFT. Despite countless reprintings and re-readings the OSDI’99 version of the paper, I never stop learning new things at every reread. This is party exacerbated by the fact that Hyperledger Fabric, an open source permissioned blockchain system, contains a Go implementation of PBFT which serves as the basis for truly understanding the protocol. Discrepancies between the implementation and the paper bring the protocol’s internal intricacies out to the surface. The following summarizes few subtleties I discovered.

Byzantine fault tolerant protocols tolerate at most \(f\) Byzantine failures. In a distributed system, however, there are two types of failures: node and network. It is important to distinguish them, especially since they determine guarantees about the protocol’s safety and liveness.

Node failure means a node (or server, peer, entity, etc.) behaves arbitrarily. This captures the strongest adversary model. A network failure refers to network partitions which can last for an unbounded amount of time. It can be quantified as the number of nodes being isolated from the rest of the network, although they can still communicate with each other.

Given this distinction, what are being counted toward \(f\)? In PBFT

Note that safety being independent of network failures is a strong guarantee, and it is common in most variants of PBFT. Not until Liu et al. recent work, namely XFT, is it relaxed in a way that separates out node and network failures.

View changes remain the most complex part of PBFT, and it is also a huge factor determining performance, if not liveness of the system. I am still far from fully understanding view change, but try anyway to explain the intuition behind its complexity. There are significant difference between MAC-based and signature-based protocols, as will be made clear later. For this, I will assume that messages are authenticated with signatures.

View change being complex, it should only be triggered by non-faulty nodes whose timers expired. It means a normal node, whose timer has not expired, will not join the protocol unless it has sees that \(f+1\) others have. Once enough nodes voted for view change, the new leader must decide on the latest checkpoint and ensure, among other things, that non-faulty nodes are caught up with the latest states, which may involve re-committing (prepare, commit, but no execution) previously executed requests in the new view. During view change, no requests are processed.

View change effectively gives a new node the power of assigning sequence number to requests. It must then ensure that the new leader does not use old sequence numbers for new requests, either deliberately or gamed into it by faulty nodes. The safety property of PBFT states that:

What it implies is if \((n,m))\) is committed at a non-faulty node in view \(v\), the tuple \((n,m')\) must not be committed in view \(v' > v\) at any other non-faulty replica. The following problem doesn’t apply to non-Byzantine settings which as a consequence needs only two phases (corresponding to Pre-prepare and Prepare). 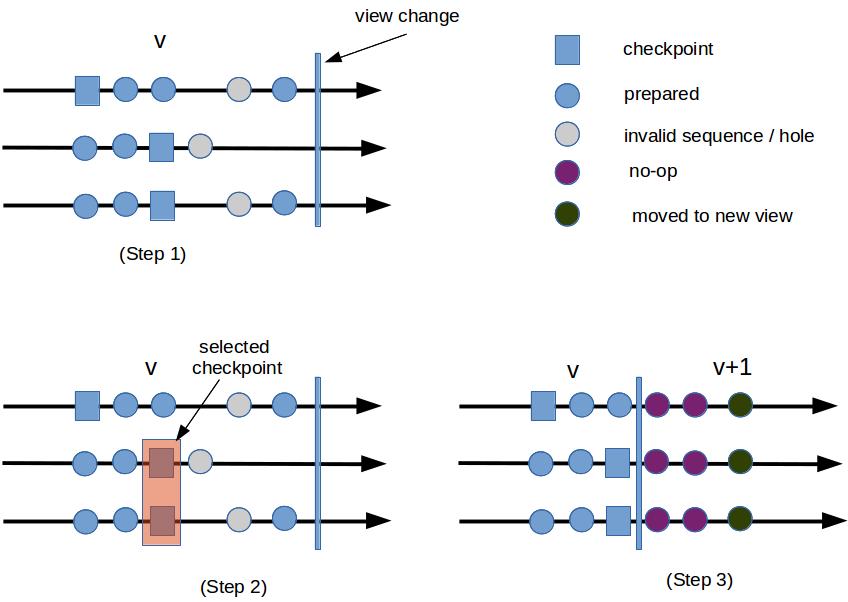 The figure above illustrates high-level steps taken by replicas during view change.

Step 1. Before view change starts, a node’s state consists of:

Step 2. The new primary selects the largest checkpoint sequence \(n\) from \(\{VC\}\). This checkpoint is stable (stable checkpoints are discussed in the next section), thus it can be reliably fetched from the network.

The collection of messages (step 1.5) and re-execution of previous requests (step 3) are communication bound. View change is expensive and to be avoid as much as possible. Nevertheless, it is essential to guarantee liveness, and completing it quickly is so important that the replicas stop accepting non-view-change related messages during the protocol.

The role of prepare certificate \(P\) during view change

Recall the safety property states that if \((n,m)\) is committed locally in a view \(v\), there will not be a committed \((n,m')\) in a later view \(v' > v\) for any \(m \neq m\). Step 1-3 above guarantee this property hold. The key idea is that if \((n,m)\) is committed in \(v\), the primary must pick it and pre-prepare the same tuple in the new view. The view change protocol uses Prepared certificates \(P\) to make sure the primary picks \((n,m)\). But, is \(P\) necessary, in other words, can the primary uses Commit certificate instead? If not, does the primary only pick the sequence that was committed locally at one replica?

Signatures are generated with a private key and verified with a public key. In contrast, MACs are generated using a shared secret. From a system’s perspective, they offer different properties:

The first property was what came to my mind when reading a passage in the original paper about alternative implementations of the protocol. I had quickly dismissed it as merely an implementation choice. I had a second chance of re-examining it when reading Byzcoin (by Kogias et. al. in Usenix Security 2016), which has one optimization to reduce communication overhead by replacing MACs with signatures. But not until reading Castro’s PhD thesis did I learn the far-reaching implication of the choice between MACs and signatures. No surprise that the thesis devotes individual section for each of them.

High-level idea. During view change of PBFT, the new leader has to prove to other nodes that it has the right to trigger view change, by bundling view-change requests from other nodes. Furthermore, a node must prove to another that it has a certain checkpoint, or is able to fetch another checkpoint. This proof is needed for selecting an initial state from which the new view begins. How to generate such proofs? Using signatures, a node can collect a set of signed statements from others, i.e. certificates containing the needed information. It can then show to another as proof that other nodes have had the information. Since there is no way to forge signatures, these certificates are sufficient. However, with MAC, the verifying node relies on non-faulty nodes to broadcast the same information. That is, rather than \(A\) present to \(B\) a certificate as proof of authenticity, it counts on \(B\) to seeks verifying information from other nodes. The challenge is for \(A\) to be certain that \(B\) will succeed in obtaining such proof. 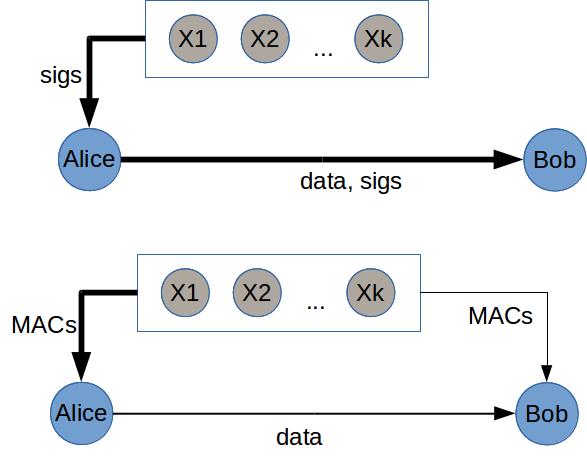 Checkpoints are essentially persisted states. They serve two roles: garbage collection and state transfer. When a checkpoint is adequately replicated, previous states including messages and certificates can be discarded. During a view change, a checkpoint is selected as the most recent states most nodes agree on. From that, some nodes need to catch up (by transferring states from another node) and some requests need to be re-committed in a new view.

To fulfill its roles, a node collects checkpoint certificates from others, and considers a checkpoint \(c\) stable when it is sufficiently replicated and can be reliably retrieved by any other node.

Discrepancy notes. The OSDI version of PBFT described stable checkpoints in MAC mode (\(2f+1\) certificates), despite it saying in the early part that it is in signature mode. Only later in the paper is it mentioned that the description is actually for MAC mode.

This excerpt from the paper is an understatement:

We were able to retain the same communication structure during normal case operation and garbage collection at the expense of significant and subtle changes to the view change protocol.

A key step during a view change is for the primary to reliably pick messages from the previous view to pre-prepare again in the new view. Signatures provide a means to verify that \((n,m)\) was truly prepared by some replicas, therefore if it was committed in the previous view it will be picked. Without signatures, verification is more complex. Each replica must verify by itself by collecting \(f+1\) messages from other replicas, as opposed to checking one signed message.

Step 1. The replica \(r\) collects message into \(PSet\) and \(QSet\), which are then included in the view change message:

Note the difference between \((PSet, QSet)\) and \(P\). The former contains local information; the latter bundle certificates from remote replicas as well. Without signatures, remote messages are of no use.

Step 2. The primary picks the starting state of the new view by choosing a stable checkpoint with sequence \(s\) which is backed by \(f+1\) view change messages.

Step 3. The primary picks message to pre-prepare as follows:

Step 3 is very confusing, and I am still unsure if I understood the reason behind it. Here is what I think I understand, based on an example illustrated in the figure below.

In this example, Byzantine nodes are marked red, non-faulty nodes that took part in the commit phase are blue, and the other non-faulty, partitioned nodes are in grey. Let’s first see why step 3 is safe. If \((n,m)\) is committed in view \(v\), it will be picked by the primary.

Notice that with only \(2f+1\), the primary may not be able to pick any message to prepare — both conditions are not met. As the result, the view change may time out. The paper makes the assumption that eventually a quorum of non-faulty nodes is available, then the primary will pick either \((n,m)\) or \((n,null)\).

Recall that during view change protocol with signatures, the primary also pick \((n,m)\) that was prepared at some replicas but not yet committed. The same happens here:

In summary, view change without MACs is safe. It may be slower in making progress, but it has the same eventual liveness as with signatures.