He was old, a typical Mediterranean old man with a rather big belly, a cherry face. He had a white shirt on, a ragged cap and a poorly laminated map of the city.

“Hello there, where do want to go”. His voice is hoarse, starting me a little.

With trembling fingers, he pointed me the direction to the Old City’s famous Western Wall on the rumpled map.

“Where are you from?” He started the small talk, feigning interest, before I had a chance to say thanks.

[… my answering this and another followed-up question …]

There went a highlight of my journey to Jerusalem’s Old City. The city was and still is the center of the world’s religions. Or at least the center of Judaism – considered the predecessor of most of the modern religions. Even discounting the fact that it was built thousands of years ago (most of its famous sites are much older than 2000 years old), the city is a modern day’s marvel of architecture. Enclosed by high walls and accessible via only a few gates, it is a city built from stones. Seen from afar, the stony wall, several church spires culminating on the dome of the Temple Mount, exude an air of fairy tales, of kings and prophets, and of holiness. 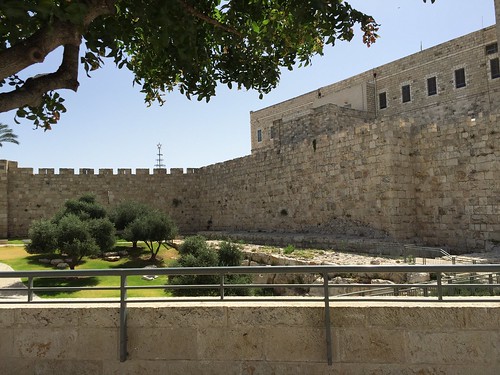 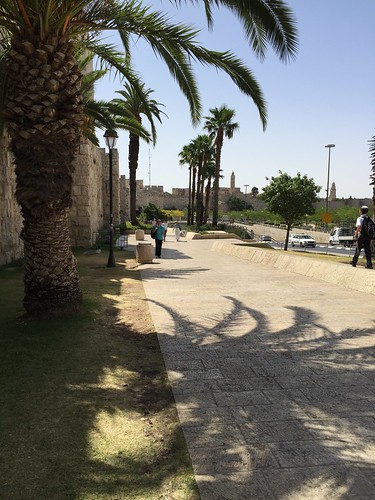 The city’s main roads and its narrow alleys are paved in stones, the houses are sturdy blocks of stone. The winds blow fiercely in the cramped and steep paths, sunlights skewered through the canopy under which lies street merchandise in vast number and in blinding colors. Those remnants of the ancient markets, marks of the old Silk Road only need some flying carpets, some roof-top chasing, some women carrying big vases on their heads and some camels to complete the fairy tales. 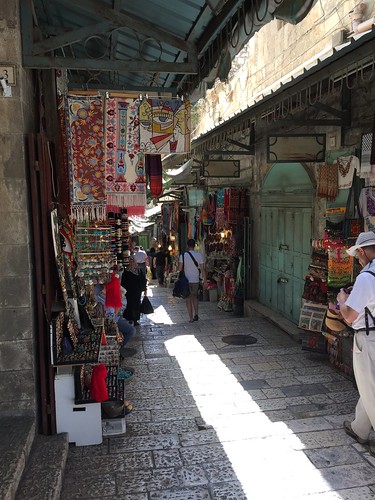 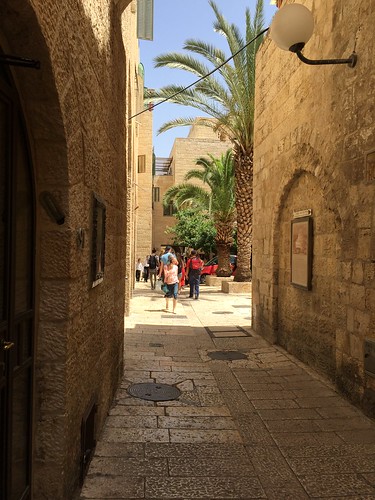 The market on the main path is all bustle. But making a quick left or a quick right on a smaller alley would almost always turn up something like this. 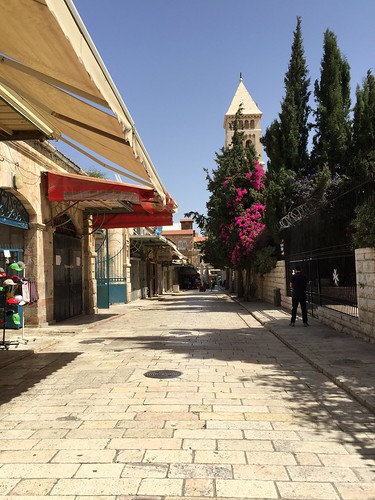 Before visiting these religious landmarks, I did a quick research on how these religions emerged and how they relate to each other. The history of religion is really a story of how humans create stories, and how those stories take on lives of themselves and impart their influences in humanity. My short version of it is this.

Israel is in the center of the monotheism development from which today’s major religions descended. This explains why Jerusalem’s old city is all religions’ holy land.

The city is divided into four logical parts: Christian quarter, Jewish quarter, Armenian quarter, and Muslim quarter. Being religiously ignorant, I have no idea about Armenian and could only guess that it was another major religion whose population has shrunk almost into extinction. But Wikipedia explains that it is in fact a branch of Christianity.

My first destination was the Church of Holy Sepulchre, the place where Jesus Christ was buried after the crucifixion (to give us Good Friday), and also where he resurrected (to give us Easter). 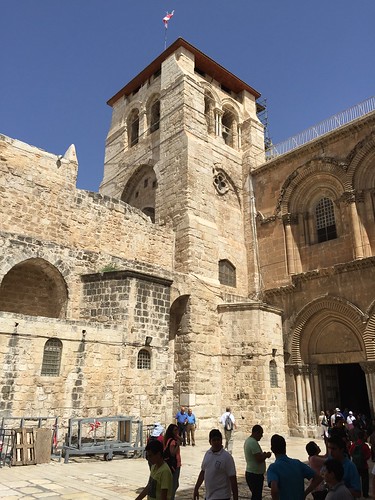 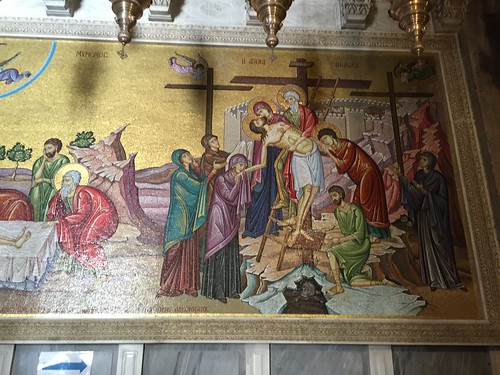 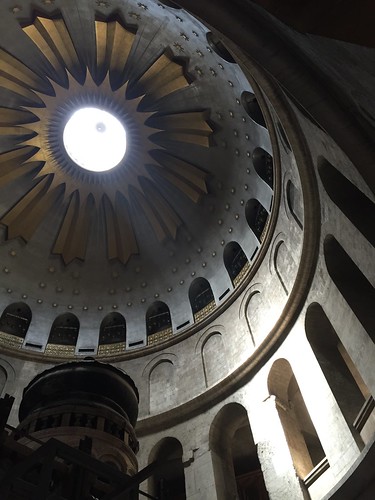 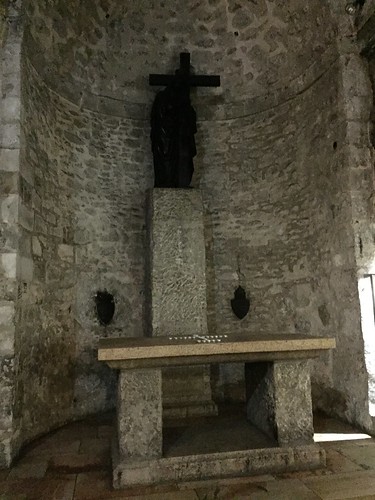 The church goes deep underground, and it appears to be built entirely from stones. There were small rooms with candles, stone altars, pictures and crosses. I caught the same feelings I got when stepping into any church: calm, inspired and humble. I followed a group of tourists, but couldn’t figure out which room is which since they weren’t speaking in English. We went down to the basement, which was chilly from lack of sunlight, then up into a wide dome. There was a round light well at the top, through which a pipe of sunlight reflected of the high balcony inside. I used to think scenery like this was due to special effect, and it was fascinating to see it live. There as a small room in the middle of the dome, and two priests (?) were guarding it. It looked quite dark inside, and there was a long queue waiting to be admitted. I was turned away for not wearing long pant. Oh well. Next time then.

Leaving the church, I had my eye fixing on Temple Mount at the very top of the city. However, the city was a maze and without the (paid) help of the gentleman earlier I would’ve been quite lost. I approached Temple Mount from an adjacent hill (perhaps on south), which presented a striking view: 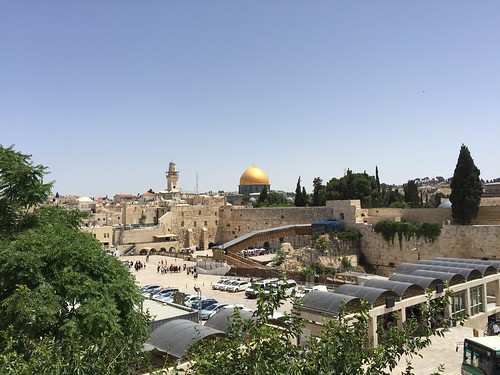 The most dominating figure is the yellow dome of the al-Qalsa Mosque. It used to be the mosque all Muslims in the world pray to (they’d turn and direct their prayers in the direction of al-Qalsa mosque). Its role today has been replaced by the Sacred Mosque in Mecca, but it remained an important destination to all Muslims. Out of 11 gates to the mosque, 10 of which are reserved for Muslims. And it was bad timing that I visited during Ramadan and the place was closed off.

But perhaps the most unique part of the Temple Mount is the Western (or Wailing) wall, on the southern border of the complex. It is believed to be what remained of the First Temple, and the holiest place of Judaism. It is believed that God’s presence is manifested at the Temple more than any other places on Earth. But the Temple was destroyed during Byzantine time (hence the wailing name) and only its western wall remains until today. Jewish people turn towards the western wall for the prayers, and ones who come would do their prayers with their foreheads touching the wall. Quite a scene to behold. 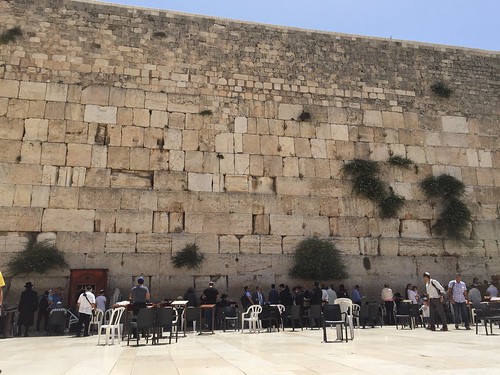 Watching this I could not help imagining how long these people have traveled, like how their great great ancestors have journeyed to this very place. But I wondered how their spirits were lifted when touching the walls, and if their prayers were transformed to something more when carried out in this place. Religion, after all, is a deeply personal experience.

I was quite lost. The main gate leading to Temple Mount was resolutely close, but on the way back there was a sign pointing to another entrance. I followed it, just to find myself in a nearly empty residential blocks. There was a blonde couple in front of me, but they quickly disappeared after one of the left turn.

I persevered till the top of the slope, then started looking around for more signs. No sooner than I made the decision to set off, a kid caught up with me. He was a chubby Jewish boy, in white T-shirt and blue cargo short. He spoke broken English:

“Temple? This?” He pointed to a picture deeply carved on a wall and barely visible.

I started heading down the steps, but he followed and kept on asking where I wanted to go. After me returning the same answer with the same shake of my head, he started:

I ignored his repeated requests for money. Then he kicked my right hand, sending some spare coins on the air and rolling down the slope. Recovered from the initial shock, I looked back and he was back hiding in one of the gate. Nothing I could do but collect the loose coins and move on.

Oh well. That what I get for not being vigilant.